Of the three cards mentioned, only the American Express Gold Card and American Express Rewards Credit Cards have had their sign up bonuses changed.  Each one now only offers half the bonus they did less than a week ago…

A further change to the sign up bonus is the requirement to now spend £3,000 in the first 3 months compared with £2,000 historically.  I know most people just about managed to make £2,000 of purchases over the 3 month period but £3,000 is likely to be a game changer for the average household. 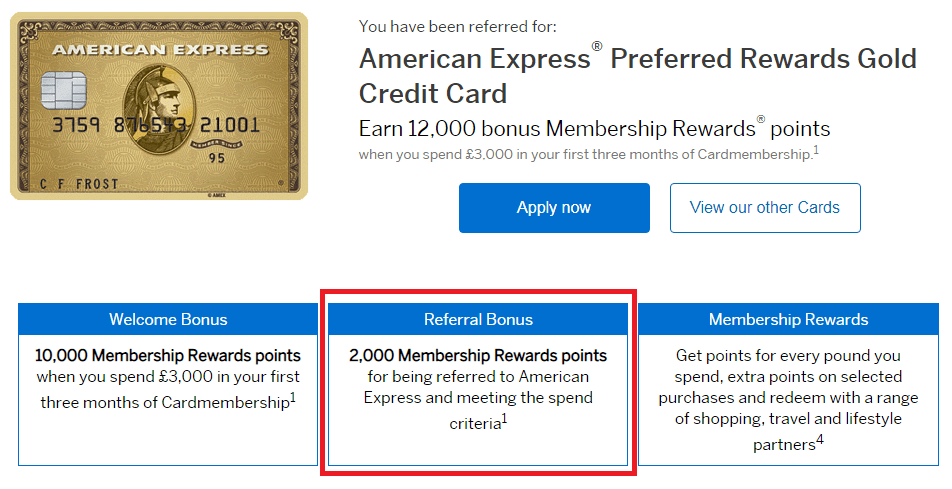 There are no increased sign up bonuses for the American Express Rewards Credit Cards if you’re referred.

Further changes include the devaluation of the refer-a-friend scheme.

Platinum cardholders will no longer receive the excellent benefit of 18,000 MR points for referring any American Express card.   This has been reduced to 12,000 MR points.

The cap of 90,000 MR points remains the same.   For those who are quicker than me at maths you’ll have noticed that 12,000 doesn’t go into 90,000 and as such on the last referral Platinum cardholders will receive a reduced rate of 6,000 MR points.

With the loss of a considerable number of third party American Express branded credit cards it wasn’t going to be long until Amex realised they had gained a monopoly on the UK credit card market.

With limited competition and American Express quite literally holding all the cards, I’m slightly surprised it’s taken them this long to devalue our beloved points earning credit cards.

Now not all is lost but this coupled with the ‘24 month rule’ does throw a small spanner in the works if you’re hoping to earn enough points for a First Class redemption – as we’ve historically written about here.

However assuming that a couple could spend say £10,000 each on a credit card each year, this may still (just) be possible.   Let’s take a look how this could be achieved.

As can be seen above it’s possible for a couple to earn somewhere in the region of 80,000 Avios points in a year which combined with the 2-4-1 rewards redemption voucher would effectively allow a couple to redeem a rewards flight which would usually cost 160,000 Avios.   Let’s see some examples of where two people could fly with BA (use our BA Avios calculator to see all options)…

Whilst the changes are likely to impact the number of times you’ll be able to redeem these flights, if used correctly the new sign up bonuses can still earn the average couple enough Avios points to be able to redeem that luxury once in a life time flight… phew!