Is flying British Airways Club Europe a good use of Air Miles?

I recently had to head up to St Andrews for work and I dragged my long-suffering other half along with me for a “romantic getaway”. I’m lucky enough to be able to travel BA Club Europe (which is essentially British Airways Europe Business Class) with work however this posed a bit of a problem. We were flying from London City Airport, which is by far my favourite London airport, however due to the last minute nature of this trip and London City flights mainly being aimed at business travellers the cost of my early morning Club Europe BA flight was extortionate.

I’m talking £500-plus return! For someone who runs a blog based on saving money when flying this just didn’t sit well with me. Buying Hannah an economy ticket whilst I sat up front was not an option, so I had to come up with a cunning plan to reduce the cost significantly. This was relatively easy to do as you’ll find out below.

As regularly readers will know, I’m an avid air miles collector and have used these for the last 2-3 years to travel the world for next to nothing! You can read about my free First Class Flight from London to Brazil here.

Because City Airport has a significant number of business travellers there is a low level of Avios point redemptions which in turn significantly increases the number of available flights where air miles can be used. I’ve just checked for tomorrow (Monday) and every flight between London and Edinburgh has full availability in both economy and BA Club Europe. This would be unheard of at Heathrow.

A return British Airways Club Europe flight would set you back 15,500 air miles (with £50 in taxes) or 8,000 air miles in economy (with £35 in taxes) so let’s focus on the easiest way to accumulate this many air miles.

There are a number of ways to earn air miles. The two main methods are through spending on credit cards or alternatively from flying with British Airways.

If you were to just rely upon the points you’ve received from flying you’d need to take between 8-64 economy flights between London City and Edinburgh depending on what status you had with the British Airways Executive Club. This rules out this option for me, as it does for most people, so let’s focus on the easier alternative – credit cards.

With credit card companies such as American Express seeking to expand their customer base, the sign-up bonuses that some of these card companies offer can be incredibly generous. By far the best in the market at the moment is the (free for 12 months) American Express Gold Card – reviewed in full here. As a quick summary the main benefits of the card are as follows:

On the basis you sign up through the link to receive the 12,000 and spent £3,000 on the card you’ll have a total of 15,000 points – more than enough for a return Club Europe BA flight. In the instance above, the saving I made of £511.34 was covered by just signing up to the Amex Gold Card – a staggering perk for a free card. As such it’s voted my number one credit card.

Now let’s get back to the BA Club Europe review!

When flying with work I rarely check in baggage and this time was no exception. When flying Club Europe on BA one great benefit is a dedicated check-in lane.

Note that this can also be used by British Airways Executive cardholders (due to the number of business flyers from London City this only applies for Silver and Gold) however the line is normally considerably shorter than the shambles they offer for economy.

One of the benefits of London City is that security is super-efficient, however the negative is that if you’re travelling Club Europe there’s no dedicated British Airways Fast-Track security lane.  This fast track is a godsend when you’re travelling from airports such as Heathrow, especially in school holidays when the queues can be at their longest.

Fortunately as is expected with City Airport, security took no longer than 10 minutes and we were airside within 15 minutes of leaving the DLR.

Again one of the disadvantages of travelling from London City airport is that there are NO airside lounges. I understand that this is a tactical ploy by British Airways because of the significant number of Silver and Gold cardholders who travel through City and would ordinarily get complimentary access to a lounge.

We did however gain access to the BA Lounge in Edinburgh and I’ve included a brief overview of what you can expect below. You can also read my reviews on the BA Club Europe lounges in Heathrow here (Lounge T5-1, Lounge T5-2 and Lounge T5-B). 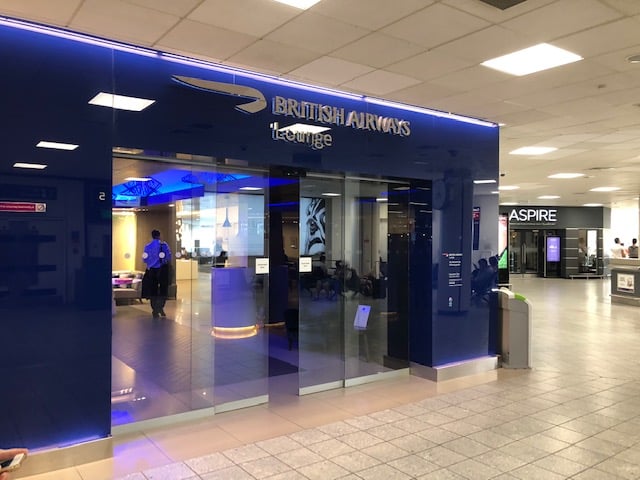 To gain access to the British Airways Galleries Lounge you either need Silver or higher Executive Club status, be travelling in British Airways Club Europe or be connecting with a long-haul Club World or First flight in Heathrow.

The Edinburgh lounge is large and has a similar layout to most BA lounges. It can get quite busy, with a number of flights occasionally overlapping. Fortunately it was relatively quiet when we arrived at about 4pm on a Thursday afternoon.

There was a good selection of food and drinks, although having had a hearty pub lunch before we left St Andrews we mainly focused on the drinks. 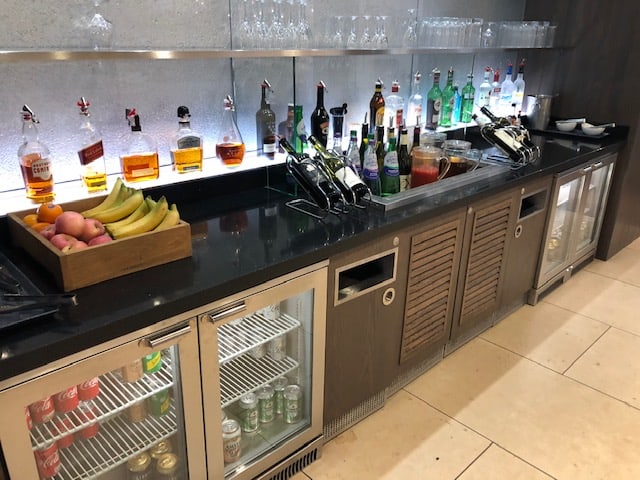 I much prefer the BA lounges over the likes of Aspire and No 1 (which you could access with your free lounge passes with the Amex Gold Card) because you can help yourself to drinks and food rather than having to wait what seems like hours for a member of staff to serve you.

There is plenty of space throughout the BA Club Europe Lounge (Galleries Lounge) with desk space and a range of seating areas. Overall the lounge gets a big thumbs up from me; just wish they had something like this in City Airport! 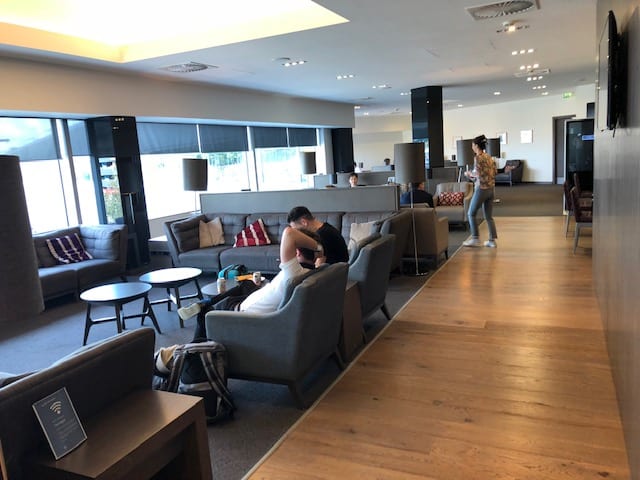 Now back to our morning Club Europe flight from City! Before we knew it we were boarding our British Airways Club Europe flight to Edinburgh and as we were Group 1 were able to board the plane ‘relatively’ quickly. I say relatively because a considerable number of people on the flight were Gold card members and they also boarded at this time. 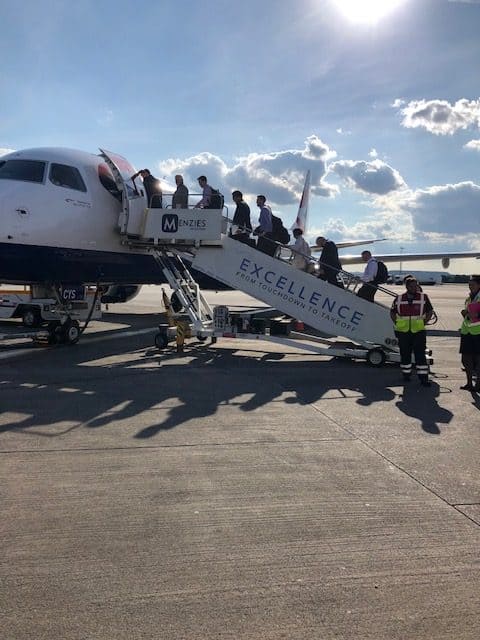 Now I would highlight that as the planes flying out of City Airport are the Embraer 170 narrow-bodied planes they only have 4 seats across compared with 6 on the A320. Therefore the BA Club Europe seats from City have no empty middle seat and as such are no different to economy. 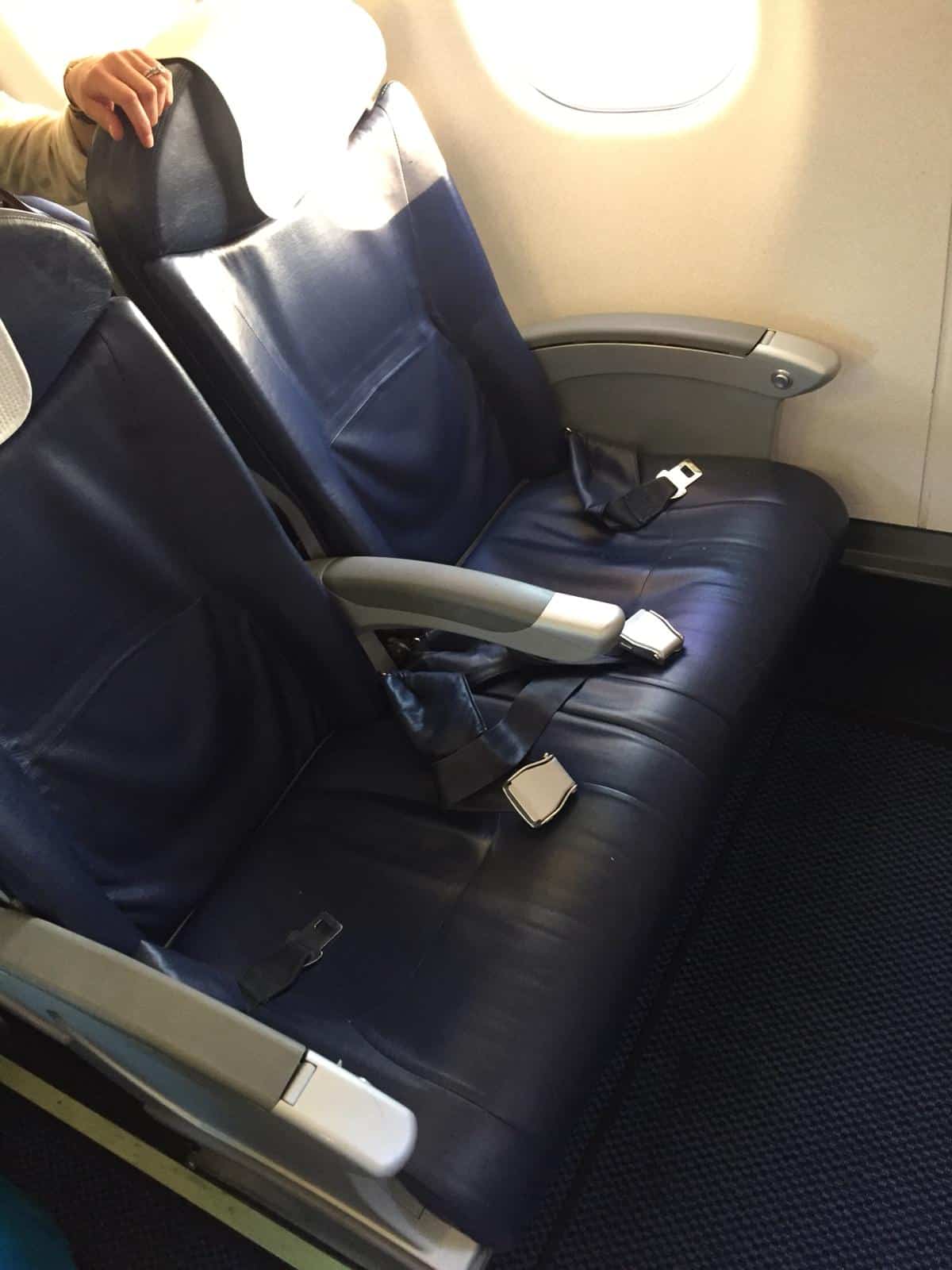 We were sitting in 1A and 1B which benefit from slightly improved legroom as kindly modelled by Hannah below. 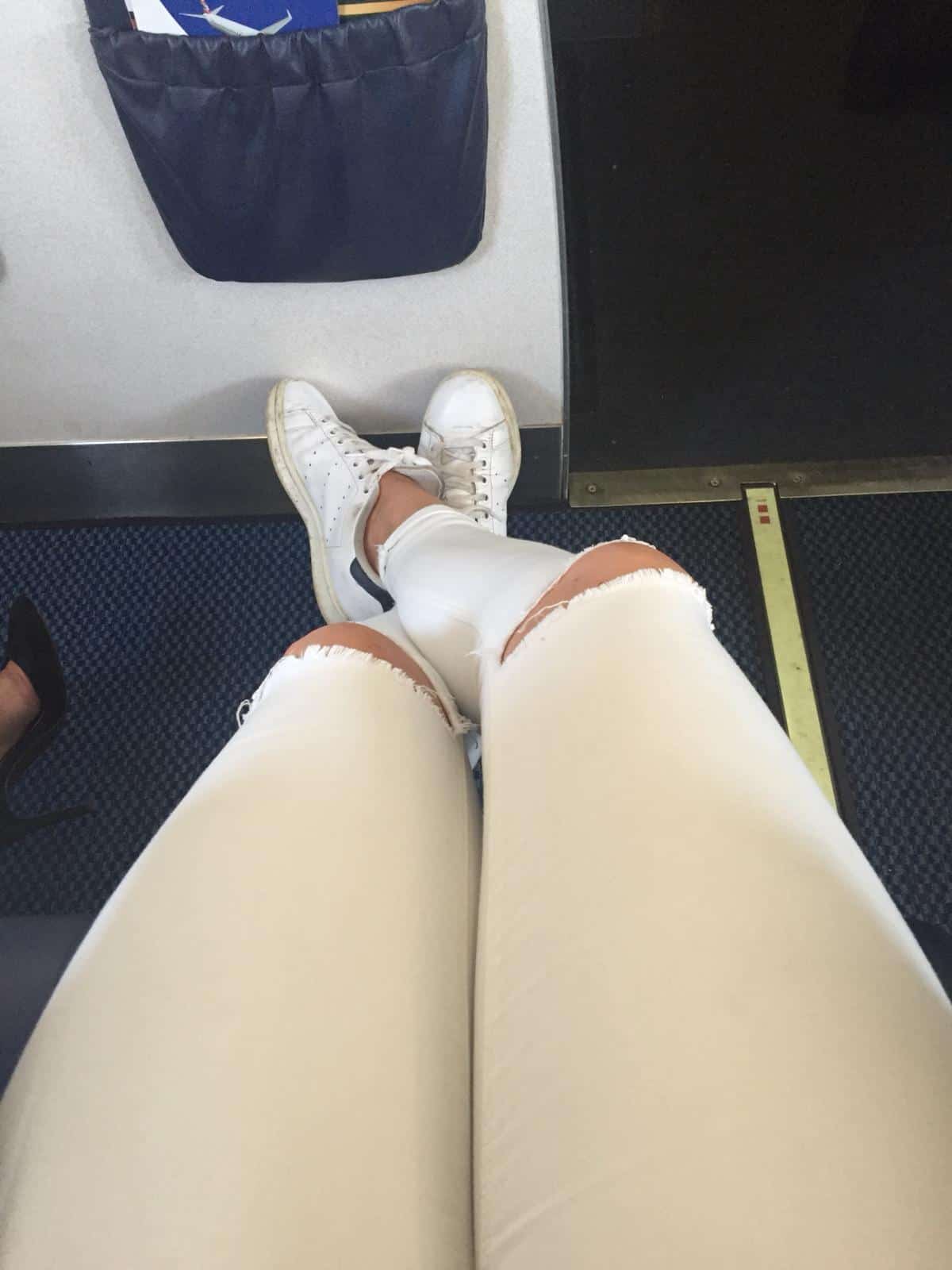 Once everyone had boarded we were handed hot towels and before we know it we had taken off (with limited traffic and a short taxi at City Airport you can be in the air in no time!).

As London to Edinburgh is a relatively short flight, the British Airways Club Europe menu is limited to say the least! We opted for the full English (note the picture below is actually from another trip I took as we both forgot to take pictures – too tired and hungry I think!). 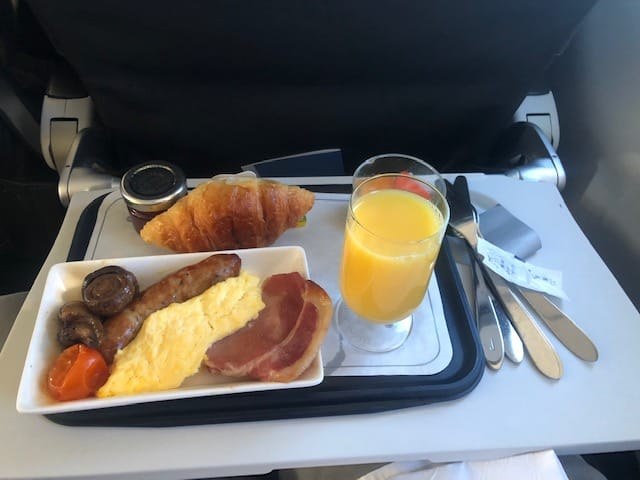 We did however take a picture of the food on our return flight. We both went for the Crayfish Salad which was fine washed down with a gin and tonic. I wouldn’t usually go for Tanqueray but with a limited selection it did the job! 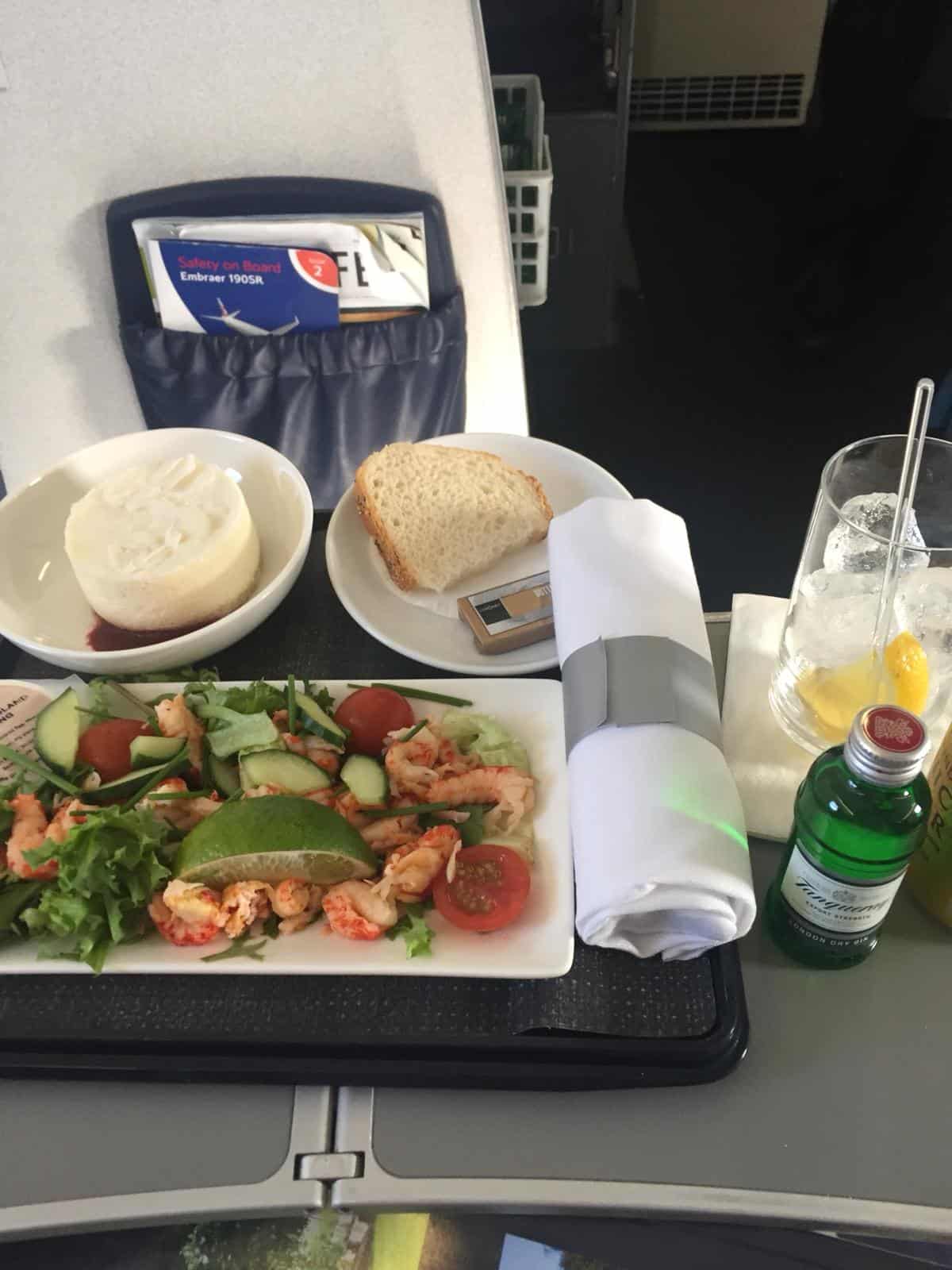 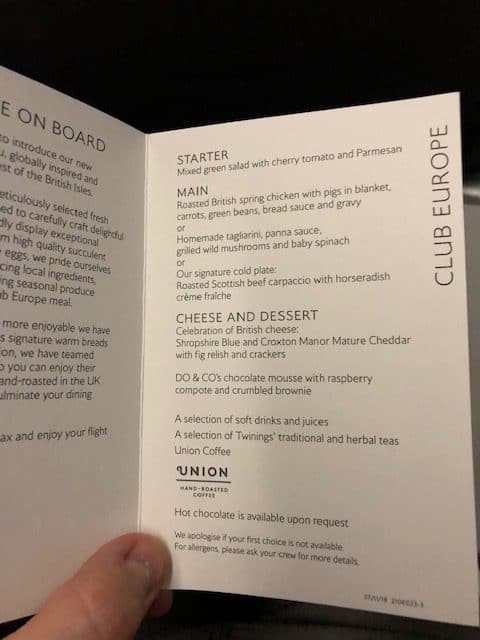 I’ve included a couple of photos from a recent trip to Helsinki. 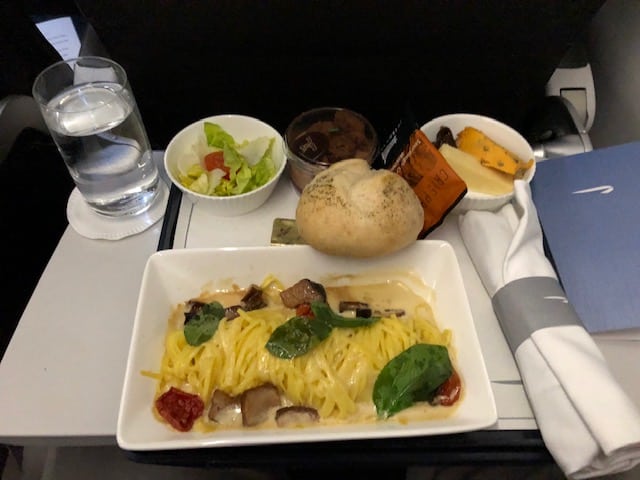 With a flight time of just an hour between London and Edinburgh, the Club Europe BA air crew have to remain on their toes if they’re going to serve and clear all the trays in time!

Ordinarily if I was travelling on my own for leisure purposes I wouldn’t consider upgrading to Club Europe BA. Why? Well let me explain:

On this basis the benefit for flying British Airways Club Europe would be complimentary food and alcohol – you’d have to drink and eat a lot in the space of an hour to justify the additional £203 that BA were asking for a 7am flight!

That said, for those who do not benefit from the perks of being either Silver or Gold with the British Airways Executive Club and if you are able to get a good deal with a BA Sale, I wouldn’t consider the BA Club Europe product to be too bad value.

If you are planning on booking with a BA Club Europe flight, I would strongly recommend that you consider using air miles to upgrade. As we’ve seen in this post my saving of £511.34 from using air miles was covered by just signing up to the Amex Gold Card (reviewed here) – you can increase your sign-up bonus to 12,000 points by using this link.

As always, we hope you’ve found this BA Club Europe review useful. If so you may also want to read my BA First Class review where I set out a step-by-step guide to earning a free First-Class flight for two!