The Roll-Out of British Airways Wifi

I recently needed to finish an article whilst on board a flight from St Lucia to London and as such decided that I’d splash out and pay for BA Wifi.  It then dawned on me that the ongoing roll-out of British Airways Wifi hasn’t had much coverage on Thrifty Points, so here’s a full review of the situation to date…

Does British Airways have Wifi onboard?

The roll-out of BA in-flight Wifi commenced back in 2016 and is expected to be completed by the end of 2020 with 90% of all aircraft being connected.  For the tech geeks amongst us, it’s being operated by Gogo using their 2Ku satellite technology.

Whilst the roll-out of Wifi on BA flights has lagged behind some of its competitors, the late adoption should technically mean the service offered is far superior (whether this is actually the case is a slightly more tricky question to answer!).

Initially the focus was on long-haul flights with either First Class (reviewed here) or a high percentage of Club World seats (reviewed here).  Short-haul planes (besides the BA CityFlyer aircraft which won’t offer Wifi) have logistically been easier to retrofit.  The introduction of BA Wifi on short-haul flights is expected to be completed by the middle of 2019, at which point it will be turned on (although I understand some have already been activated).  Unless you’re in Club Europe I find using a laptop on the short-haul aircraft very difficult!

How Can I Find Out if there Will Be BA Wifi on My Flight?

Which BA aircraft have Wifi? It’s a commonly asked question.  Unfortunately there is no way of knowing in advance whether your flight will be Wifi enabled.

For some of the aircraft that will be retired soon, British Airways have decided that the cost to install Wifi is simply too high.  As such 20 aircraft will not feature Wifi at all.  These are predominantly the Boeing 747-400 Mid-J (all 16 won’t be fitted with Wifi) as well as one 747 Super Hi-J and 3 of the 777-200 (4 class).  At the date of writing this British Airways on-board Wifi review, 65 long-haul aircraft have had Wifi installed, with a further 48 to be completed by 2020.

We set out below a list of all the planes which have had Wifi installed as at the date of this review.

As can be seen from the above, if you’re flying on either the 3 class or 4 class 777-200 there’s a strong chance that you’ll benefit from Wifi on your BA flight.  Currently British Airways Wifi is not offered on any of the 787 Dreamliners, which will be the last to benefit from the planned roll-out.

There are two options for British Airways Wifi depending on whether you simply fancy browsing the internet or alternatively streaming videos from the likes of Netflix or Amazon Prime.

I signed up to the full flight browsing package at a cost of £14.99 and to be honest I was thoroughly impressed.  Yes it dropped out twice during the flight, for no longer than a couple of minutes, but in my eyes this is more than acceptable on the basis we were cruising at some 500 miles an hour at 37,000 feet. 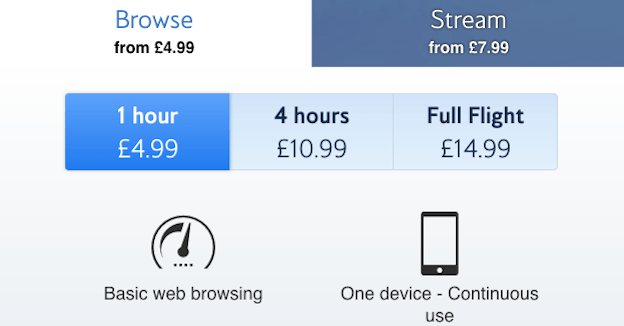 Tip: If you choose to pay in dollars it can work out slightly cheaper.  I’ve summarised this from the Stream option in the table below.  This is based on using a 0% FX card such as the Revolut (reviewed here).

Are there certain places in the world British Airways Wi-Fi won’t work?

Unfortunately yes there are places British Airways Wifi on planes won’t function.  This is across all airlines and not just BA.  We’ve included the map below to show areas which are excluded. 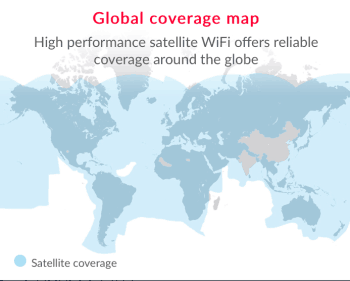 For those travelling on business (in particular those who charge by the hour) the ability to use Wifi on BA flights could have significant appeal, especially on long-haul flights!  However, sadly the current uncertainty around whether your flight will be Wifi-enabled may be enough to deter business travellers from using British Airways.

I suspect it wouldn’t be so important for leisure travellers.  That said if I was travelling for leisure and had spent a considerable amount of money for a Club World or First Class ticket to be charged a further £15 to access British Airways Wifi I’d feel slightly hard done by…  Just for your information, I’d rarely pay for an upgrade to either Business or First especially if there’s the option to use Avios points to upgrade.  You can read how I recently used Avios earned from two credit cards for two First Class tickets to Sao Paulo here – including a step-by-step guide as to how you could do the same!

As always please do reach out in the comment section below with any views on BA Wifi – we love to hear your thoughts!