I was interested to read in a recent BA press release that there are now over 10 million British Airways Executive Club members.  With the total UK population somewhere in the region of 66 million, the BA Executive Club has a membership base which is nearly 15% of the size of the UK population.

There have been significant changes over the last 12 months in the credit card industry.  The EU-imposed cap on the amount credit card companies can charge retailers has created a challenging environment for a number of the international frequent-flyer programmes which have historically offered UK frequent-flyer airline credit cards.

With the removal of MBNA-issued credit cards by the likes of United Airlines, American Airlines, Lufthansa, Etihad and Emirates, we thought it was about time that we provided an updated review of the best airline credit cards UK to see just how the landscape has changed over the last 12 months…

We mentioned earlier that the airline credit card market has changed over the last 12 months and whilst this is true, the saga has actually been dragging on since 2016!  Back in 2016 the EU capped interchange fees charged by Visa and MasterCard at a maximum of 0.3% for personal credit cards and 0.2% for debit cards.

The reason behind this was that Visa and MasterCard were abusing their position, whereby they were charging excessive fees and taking on very little (if any!) risk.  This was because the card issuer (say Barclays) would be liable for bad debts and the retailer responsible for charge backs, etc.

For directly issued American Express cards (such as the Platinum and Gold), Amex would take on the risks of the card issuer, and as such in 2018 it was decided that directly issued cards would not be subject to the cap.  However for all third-party cards (such as the numerous MBNA-issued airline credit cards UK) it was decided in mid-2018 that they would indeed be subject to the 0.3% interchange cap.

With benefits offered on these cards with a value greater than 0.3% of spend, it was only going to be a matter of time before the cards were withdrawn from the market.  As such almost overnight the number of UK airline credit cards dropped massively.

Why Should You Sign Up to Airline Credit Cards?

Regular readers will know the many benefits of air miles, however if you’ve only just stumbled upon Thrifty Points, I thought it may be worthwhile running a quick recap of some of the excellent redemption opportunities made possible through an airline points credit card.

I started collecting air miles some 10 years ago and whilst it’s changed significantly over this period (sometimes for the better and sometimes for the worse), I’ve been lucky enough to have been able to use points to travel the world for next to nothing ever since.

A great example of this is when Hannah and I recently experienced British Airways First Class, flying from London to Sao Paulo using points earned across 3 credit cards in less than a year.  Yes that’s right – it’s possible to earn enough points in a year for 2 First Class flights. Read our review found here for a step-by-step guide. 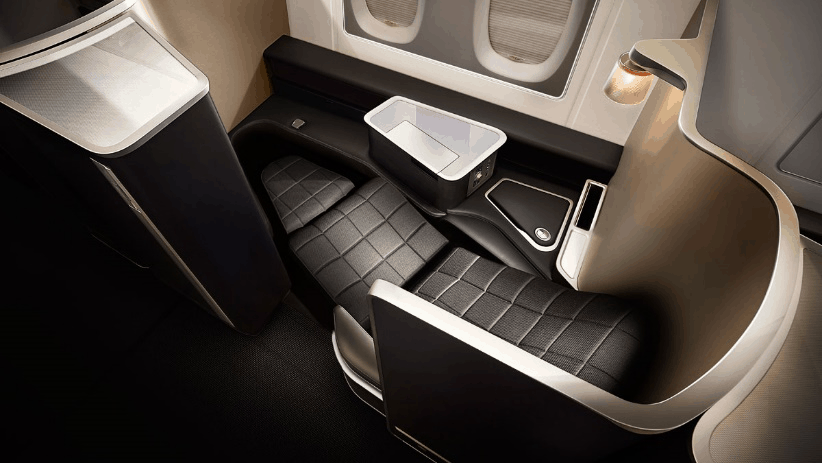 With First Class international travel available, let’s take a look at the best airline credit cards for booking that trip of a lifetime!

It’s a common misconception that the best credit cards for air miles are those issued directly by the airlines.  Whilst this is sometimes true, there are also other credit cards which will allow you to earn points which can be transferred to a variety of different frequent-flyer programmes.

As such, we’ve split this review into two main sections.  The first focuses on what I describe as ‘branded’ airline credit cards – an example of this would be the British Airways American Express which tends to be the ‘go to card’ for most Avios newbies.  However as we’ll see this is generally a mistake, with other UK alternatives offering twice the number of benefits.

The second section will focus on credit cards which allow you to transfer points to a chosen frequent-flyer scheme.  As we’ll see, branded credit cards do not necessarily provide the best option and there can be a great discrepancy between the two.

Ok, so back to the best branded credit card for airline miles.  With the MBNA-issued Emirates, Etihad and American Airlines cards all being withdrawn in 2018, there are now just 5 branded airline credit cards available to UK residents.

As we recently wrote here, American Express has just reduced the sign-up bonuses across some of its most popular cards.  Virgin seem to be keen to capitalise on this and have recently launched an incredibly generous bonus promotion across their two cards.  We listed the 5 airline miles credit cards in order of sign-up bonus below.

Whilst the current promotion offered by the Virgin credit cards makes them very attractive, our favourite card from the list above is the British Airways Premium Plus Card. Whilst the sign-up bonus of 25,000 Avios when you spend £3,000 in the first 3 months is good (increased to 26,000 using this link), the 2-4-1 voucher is by far the most attractive aspect of this credit card.  The voucher will essentially allow you to reduce the total number of Avios required for two passengers by 50%.  This has the potential to save well over 100,000 Avios on a long-haul premium redemption…

There are a number of UK credit cards which will allow you to earn points which can subsequently be transferred to various frequent-flyer programmes alongside various other redemption partners.

Points with a variety of flexible redemption partners are generally worth more than those that are restricted for use with just one programme.  To help explain this, let’s take a look at an example using Virgin Flying Club miles. For someone who would only ever fly to destinations in Europe there are very few flight redemption options to use the miles earned with the Virgin Rewards credit card.  As such they’ll likely be redeemed with a transfer partner where you’ll only receive a rate of 0.3p-0.5p.

However if these were earned as American Express Membership Rewards points you still have the option of being able to transfer points to Virgin at a rate of 1:1 but you’ll also be able to transfer the points to BA.  There is far more availability with BA and you’d receive a points value somewhere in the region of 1p per point compared to 0.3p-0.5p.

So what are your options for the best alternative to an airline credit card?  Let’s take a look below – again these are ordered by sign-up bonus…

From the table above, we believe that for most people the best credit card for airline miles will be the American Express Gold Card (reviewed here).

The card is free for the first year, after which point we’d recommend you cancel, and offers a sign-up bonus of 10,000 points (increased to 12,000 using this link) when you spend £3,000 in the first 3 months.  You’ll also receive 1 point for every £1 spent and 2 free airport lounge passes.  With 14 airline partners, Amex Membership Rewards points also offer excellent redemption opportunities. 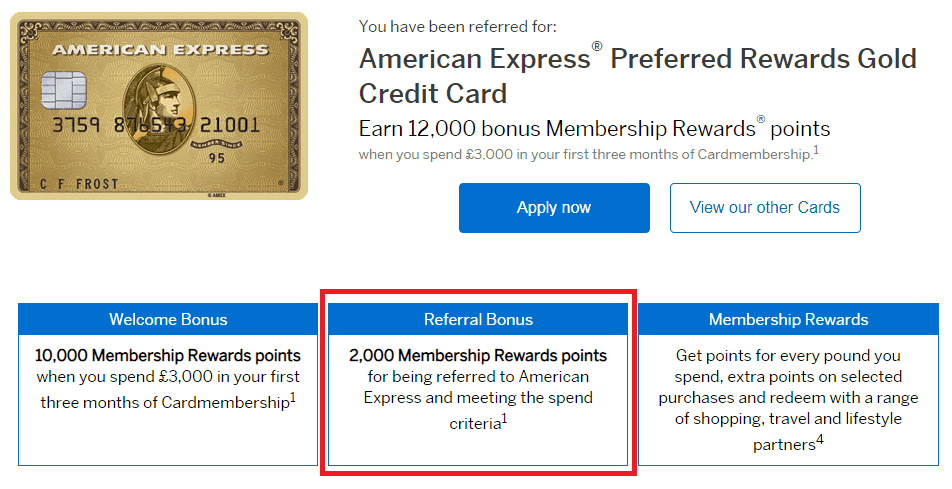 By combining both the American Express Gold card with the BA Premium Plus, it’s possible to earn up to 38,000 points in sign-up bonuses.  With recent rules to American Express bonuses, a new quirk with the system means that you’ll need to sign up to the Gold card first and then the Premium card in order to benefit from the sign-up bonus with both.

As we discuss here, it’s possible for a couple to earn enough points in a year from both cards to redeem a First Class long-haul flight!

We hope you’ve found this article on the Best Airline Credit Card UK useful and as always like to hear your thoughts, so please do reach out in the comments section below.