One of the most common questions we receive at Thrifty Points relates to finding available BA reward flights using the British Airways website. We completely relate with the frustration of readers who have a considerable number of Avios points and struggle to be able to redeem any form of British Airways reward flight.

For those who are new to Avios points you may not be aware that alongside British Airways, Avios points can be used across Aer Lingus, Vueling and Iberia. Each airline offers the ability to transfer points between the 4 different frequent-flyer programmes using the ‘Combine your Avios’ function. The ability to use Avios across 4 different airlines opens up various quirks which can be exploited to save Avios as well as associated taxes.

How is a British Airways Rewards Flight Priced?

Like most airlines, the number of Avios points required to book BA reward flights is based upon the distance of the flight flown. The distances are split into a total of 9 zones as summarised below.

Now interestingly BA, Iberia and Aer Lingus have different peak calendars and as such using the calendars wisely can save a significant number of points! You will have to fly via the likes of Madrid or Barcelona, however as we highlight within our Avios Hacks article this can save both a considerable amount of points and perhaps more importantly reduces taxes by up to £250 per ticket!

Key quirks to highlight would be that Aer Lingus doesn’t have peak times during February or October half terms whereas British Airways does. Similarly Aer Lingus’ April peak-date range is one week shorter, increasing the chances of redeeming a flight during UK school holidays with an off-peak redemption tariff. 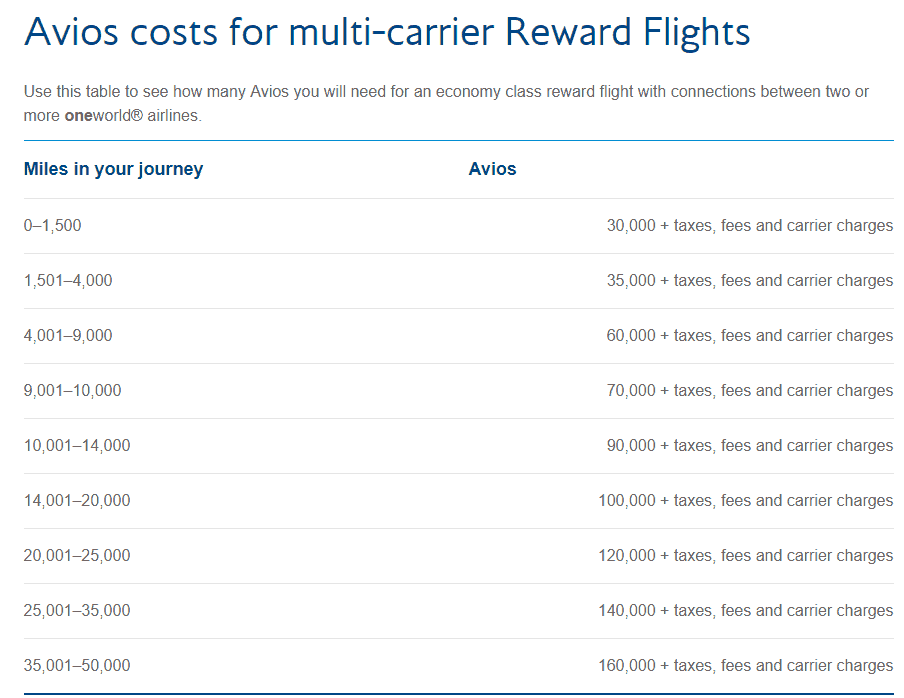 Unlike standard reward flights on BA the difference between economy and Business Class on 2 or more Oneworld carriers is 2 times economy (compared to the standard rate of 3 times economy).  This can present good value redemptions.

As we can see from the above the most significant charge is imposed by British Airways with UK Air Passenger Duty and Passenger Service Charges also making up a significant proportion.

You’d be mad to use your Avios points for a long-haul economy British Airways reward flight as you’d almost certainly be able to book a cheaper flight with one of BA’s competitors or sometimes even cheaper with a BA cash ticket.

However the taxes on short-haul economy reward flights on British Airways are capped at £35 and as such redeeming for short-haul flights can provide good value.

As we discuss in full in our Avios Hacks article, if you’re prepared to fly via either Dublin with Aer Lingus or Madrid with Iberia you can significantly reduce the taxes on redemption flights.

You’d be forgiven for thinking that the easiest method of finding reward availability would be to search through the BA website. Whilst you can search for reward availability here, we’d recommend using BA Redemption Finder which provides a full year’s calendar of availability between two different cities.

If you’re prepared to pay for the premium service (at a reasonable £3 per month) you’re also able to search for all BA reward flights availability for certain dates from one airport. This is a great option for those who have a considerable number of Avios points and like visiting new places!

At this point we thought it would be useful to provide a step-by-step guide to booking British Airways reward flights with Avios.

You can find the British Airways website here. Log in using your Executive Club number. Under the discover tab go to the ‘Spending Avios’ page. 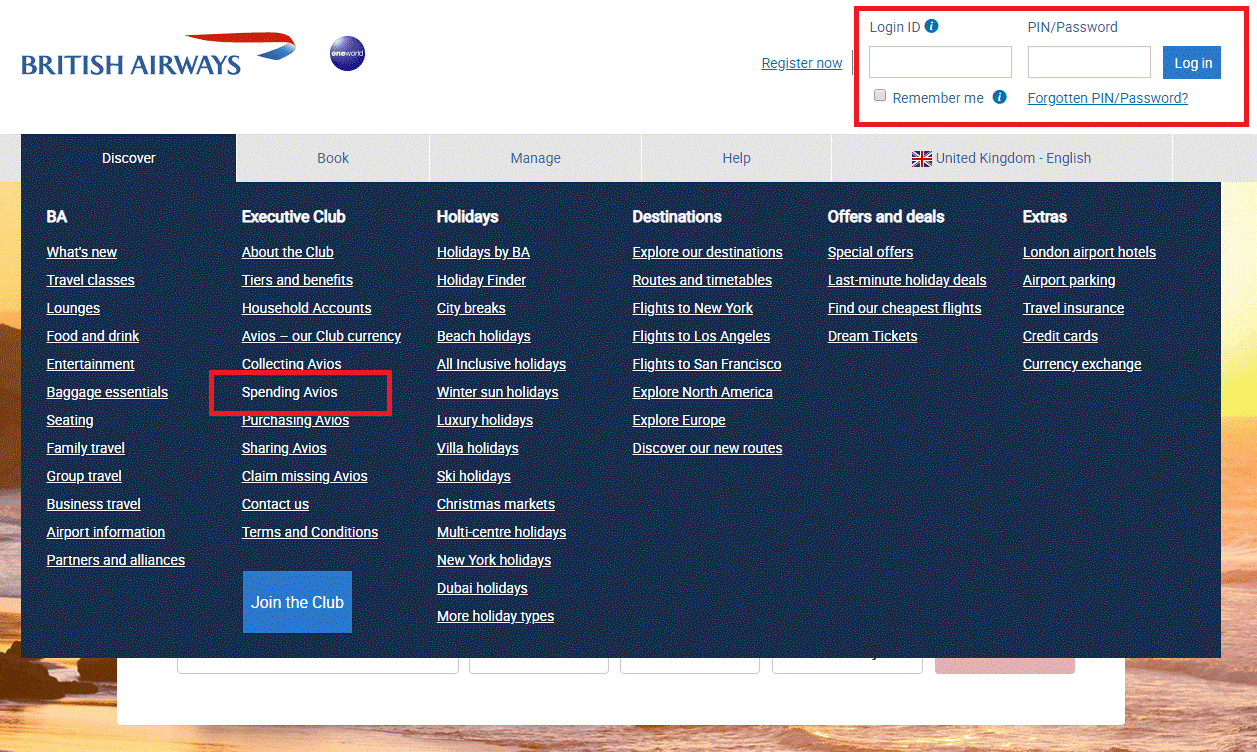 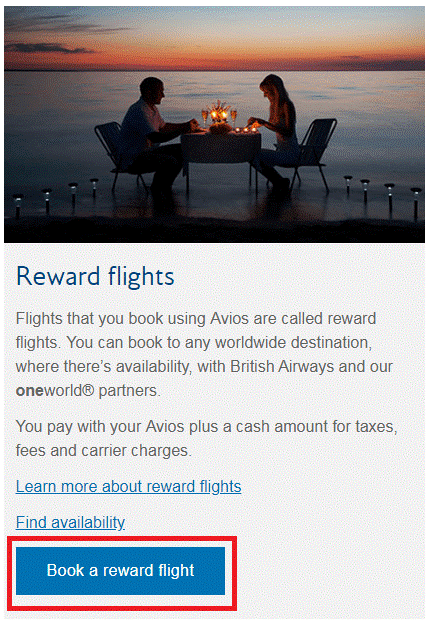 Once you’ve used the BA Redemption Finder to find your perfect flights, this section is relatively straightforward. Simply enter the dates and class of the flight you’d like to take: 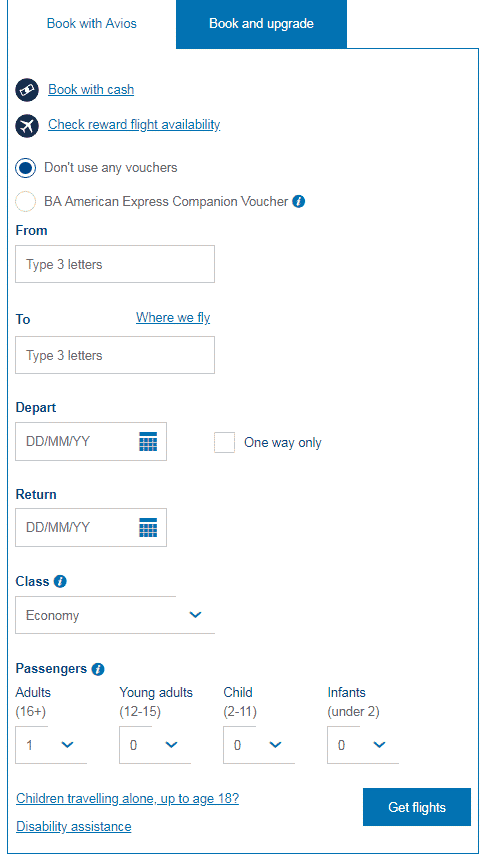 Step Four:  Find Your Flight and Choose to Continue 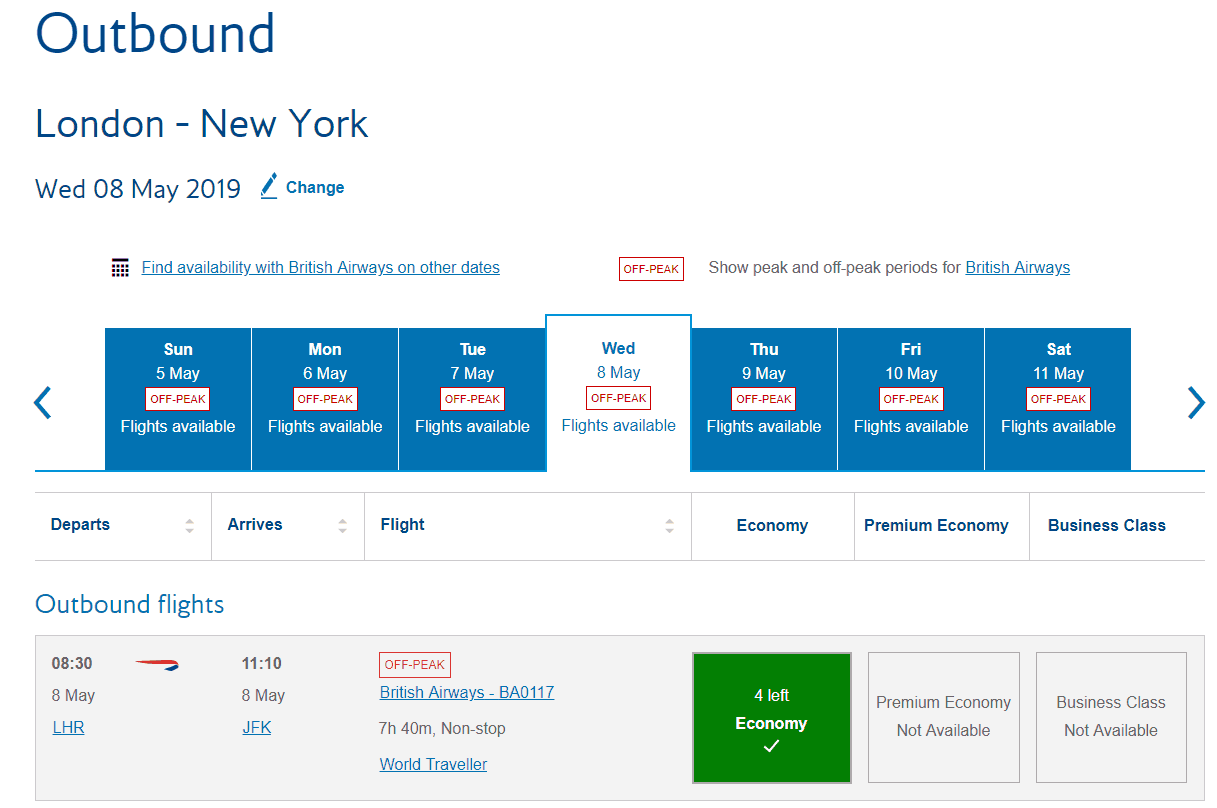 The final step is to enter the passenger details and pay the associated taxes.

As such in comparison to a normal British Airways flight, redeeming Avios points can help save a considerable amount of money. Reward Flight Saver is available on flights up to 2,000 miles.

Using ‘Part pay with Avios’ Instead of BA Reward Flights

As I previously mentioned, a return economy BA reward flight between London and New York would require 26,000 Avios points and £374.22 in taxes. To book the same flight with cash would cost £409.22. You could however use the Part pay with Avios function to reduce the cost to £309.22 using 5,000 Avios. In this instance not only would you save 21,000 Avios points you’d also save a further £65. Worth considering when booking economy British Airways reward flights.

Reward Flights BA – What Airlines Can You Redeem Avios With?

As we mentioned earlier British Airways is part of the Oneworld alliance allowing Avios reward flights to be booked with 12 other airlines.

How many British Airways reward tickets are released on every flight?

There are a minimum of four economy tickets and two Business-Class tickets available on every British Airways flight. Unfortunately there is no guarantee that either World Traveller Plus or First Class seats will be available. Depending on the speed of cash seat sales, further redemption seats may become available on certain flights.

When are BA Reward Flights released?

Can you fly into one airport and out of another airport?

Yes. This is known as an open jaw ticket and is in fact one of my favourite ways of redeeming BA reward flights. As long as the distance between the original city and new city is less than the distance between the outbound and return flights then you can book a different return city. You are unable to book an open jaw ticket through the BA website so you’ll have to call the BA Executive Club to book directly.

It can also help with reward availability – I’m due to fly to Tokyo in the next couple of months in BA First Class (recently reviewed here) however there wasn’t any return availability. I’ve therefore added a couple of nights in Seoul where there was availability in Business Class for a return flight to London.

Can I change or cancel a British Airways reward flight?

Yes, it’s possible to make changes to British Airways reward flights with a charge of £35 per ticket per person. There are no charges for Gold members or Gold Priority reward bookings.

As we’ve seen in this review, whilst the process of booking BA reward flights is relatively straightforward, to ensure there is availability on busy routes you may need to book 355 days in advance to avoid disappointment.

Booking a long-haul economy British Airways reward flight rarely makes sense. In this instance you’d likely be better off purchasing a cash ticket and using the Part pay with Avios option at check out.

To reduce taxes on Avios redemption flights, you want to consider redeeming points with either Iberia or Aer Lingus.

If you’re looking for inspiration as to how to redeem your points you may want to read my recent British Airways First Class review where I provide a step-by-step guide to earning enough Avios points for two people to fly First Class for less than the price of an economy ticket!