Is the Recent Curve American Express Collaboration the Best Thing Since Sliced Bread?

Predominantly for the purpose of collecting points, I hold a large number of credit cards and for some reason until recently I’ve carried all of these with me wherever I went. Apparently I’m not the only one, with the average person in the UK carrying 3.6+ credit cards in 2016 according to the founders of the Curve card. I have to admit I’d let the Curve card pass me by until November when they finally reintroduced the ability to use the Curve card with American Express (albeit this is only available to Beta testers until early 2019 when it will be rolled out to all cards).

The Curve card is another British fin-tech success, which in December 2018 hit 300,000 customers. Of these over 100,000 spend over £1,500 per month on the card. The Curve card allows you to combine all your bank cards into one card and now, importantly, has the potential to include American Express. The founders of the Curve card set out to drastically reduce the number of physical debit and credit cards we hold while still allowing individuals to benefit from the various perks of each of their cards (be it rewards points, 0% foreign exchange fees, etc.).

So what is the Curve card? With the tagline of ‘all your cards in one’ the Curve card is an electronic payment MasterCard which allows you to collate all of your cards into one product. By downloading the app you can control which credit card your various individual transactions are charged back to. You can now charge back to nearly any debit or credit card you hold. As the transactions appear as though they are for a MasterCard debit card this has numerous benefits, especially for those whose local retailers do not accept American Express or alternatively if you want to reduce excessive foreign exchange fees. I’ll cover the full details later on in this article.

Curve Card – How Does it Work?

Once you’ve downloaded the Curve app to your phone you’ll need to upload the details of each of the cards you’d like to use on the Curve card.

You can then use the app to switch between your linked cards with a single tap – whichever is selected in the app is the one that will get charged when you use the Curve card. Don’t worry, if your phone is out of battery or you can’t be bothered to sign into the app each time, the Curve card will just revert to the last used card. You then have the ability to move the payment to an alternative card at a later date (up to 14 days) should you wish…

The Different Cards – What’s the difference between the Curve Blue and Curve Black?

There are two Curve cards currently available on the market. The Curve Blue card is the free version and the Curve Black is the premium version which comes with an annual fee of £50. As regular readers will know, I’m not adverse to paying credit card fees HOWEVER the annual benefits must outweigh the cost of the card…  Let’s look at the benefits of the free Blue Curve card UK. 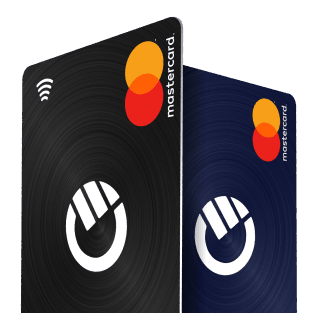 Curve Black Card Review – What else do you get?

So is the premium Curve Black card worth the £50 per year fee? Yes but only if you’ll spend an average of £710+ per month abroad or plan on spending over £630 with a linked American Express card.

That said for international spending if you’re prepared to have yet another card (although that kind of defeats the object of this Curve card review, which is all about reducing the number of cards you hold), the Revolut card is free and offers 0% FX fees up to £5,000 per month – read my full review here.

So you’ve decided that the Curve card is the one for you. Registering is straightforward, just follow the step-by-step guide below:

Why You Should Sign Up to the Curve Card

As I mentioned earlier in this Curve card review, there are a number of benefits offered by the Curve card UK. These include:

Here at Thrifty Points, we believe that one of the best benefits of the Curve card is the ability to redeem reward points from high-yielding American Express credit cards where historically these cards weren’t accepted. With the large majority of retailers accepting MasterCard you’re able to use the Curve card connected with an American Express card. This will considerably increase the number of outlets in which you can use your Amex card going forwards.

For those who are new to collecting air miles with credit cards or if you’d like to boost your existing air miles stash, we’d recommend the (free for the first year) American Express Gold card (reviewed here). The card comes with a sign-up bonus of 10,000 reward points (12,000 if you use this link). American Express reward points can be redeemed for a whole ton of things. Worst-case scenario would be to offset the points against your credit card bill at a rate of 0.45p for every point (equating to £54 if you used the link). If you were to redeem them against flights the value could be significantly more. Read my BA First Class Review here to see how I used two credit cards to fly myself and my other-half First Class to Sao Paulo…

With a detailed breakdown of spending available in the app, you can analyse spending habits and introduce budgeting features should you wish.

For business spending the Curve card app also integrates with Xero, allowing you to mark spending as business expenses in the app and then snapping a picture of the receipt. If you use different accounting software you can have a report delivered to your email or alternatively download a CSV file.

With 0% FX fees and MasterCard exchange rates you’ll benefit from some of the best foreign exchange rates in the market. Just remember that with the free card FX fees of 2% are charged once you spend over £500 in a month. Also note that at the weekends, Curve add a fee between 0.5% and 1.5% to cover currency fluctuations while the FX markets are closed. This is standard across all cards.

Should you lose the Curve card you’re able to lock the card at the touch of a button. The app will also provide notifications of spending on the card, alerting you quickly to any possible concerns.

If you were to withdraw cash from an ATM using a credit card you’ll ordinarily be charged a large fee by your credit card company for the privilege.

As the Curve card is a Mastercard debit card, and with the way things work behind the scenes, your cash withdrawals will appear as an online transaction on your credit card statement.

You can only make 10 ATM withdrawals per month with the Curve card for free and a fair usage limit of £200 per month applies for credit cards.

The ‘Go Back in Time’ feature allows users to move payments from one credit card to another within a 14-day period of the expense being incurred. This could be great if you’d forgot to put say your British Airways flights on your BA American Express where you’d benefit from the double points promotion…

As I mentioned before, the average UK resident has 3.6 cards within their wallets/purse. Whilst this is nothing in comparison to the average for US citizens, who have 7.5 cards per person, it is still a considerable amount to carry around. In a society keen to reduce plastic waste, perhaps having just one card with numerous providers preloaded could be an incredible option…

How to use the Curve card with Amex?

The Curve American Express combo is currently only available to those who’ve signed up to the Beta testing programme.

You’ll need to have downloaded the Curve Beta app as opposed to the standard Curve app. You’ll then have the option to add an American Express card as a payment card (read the terms and conditions here as unfortunately only cards starting with certain card numbers will be accepted – I’ve checked all of mine and they are all accepted).

You will then need to pre-load an e-wallet with a minimum top-up amount which is never more than £100. When your balance falls below a certain level your e-wallet will be automatically topped up.

Note that during the Beta Testing stages you can only add one Amex card to the Curve app. 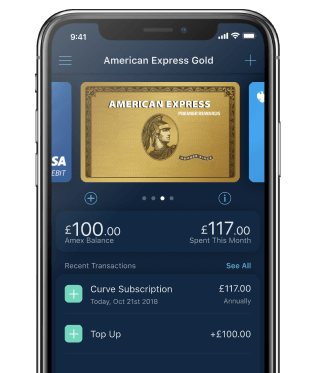 Where is the Curve card available?

Curve hope to be able to roll the cards out in Croatia, Cyprus, Greece and Slovakia in 2019.

Frustratingly Curve card Rewards are limited for a period of 3 months and only available to new customers. In the first 3 months you’ll receive 1% cashback on three retailers of your choice.  There are currently over 50 retailers (full list found here). Outlets of particular note for Thrifty Points readers include Marriott International Hotels and Virgin Experiences. Curve Rewards with the premium card can be earned across 6 retailers as opposed to the 3 retailers for the free card.

Upcoming changes to the Curve card?

Like all fin-techs, the team at Curve are continuously pushing boundaries and 2019 won’t be an exception. Key developments for 2019 include: 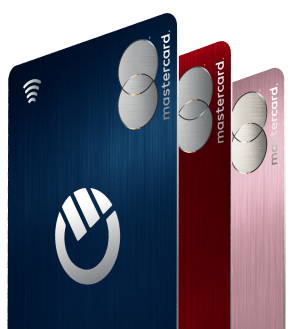 Curve Blue and Curve Black – what Curve card is right for me?

As we covered earlier in this post, the premium version of the card is only really worthwhile if you plan on spending more than £630 on a linked American Express card (currently only available to Beta app users – invite only) or alternatively will spend £710 per month abroad. That said you’d likely be better off opting for a 0% FX fee card such as the Revolut card in this instance. Long and the short of it is that we wouldn’t recommend the premium Curve Black card for the vast majority of individuals.

With limited competition there is currently no direct Curve alternative. I suspect it won’t be long until a similar provider pops up. With over 300,000 users, Curve has done an excellent job of gaining market share. So at present the only Curve card alternative is lugging your various credit and debit cards around with you…

We be delighted if you’d use our Curve card promo code. Just enter BKLYY when applying for the card and you’ll receive £5 of free credit.

With a usable app-based interface, the Curve card currently does a good job of combining numerous debit and credit cards. Whilst the Curve American Express combo has recently been launched it’s unfortunately only available to a select few who are currently trialling the Curve Beta app.

The introduction of the Curve Metal card could possibly be a game changer depending on the cost. It’s unlikely to be cheap, however we’ll just have to wait and see. Further innovations are likely to make the cards even more appealing although I believe Curve will come into its own once it has a fluid and easy-to-use agreement with American Express.

If you are thinking of signing up, we’d be over the moon if you’d use our Curve promo code – BKLYY. Curve will give you £5 credit upon signing up as well as providing us with a small fee which will go towards covering the costs of this website.