There are a total of 3 Finnair lounges in Helsinki Airport: 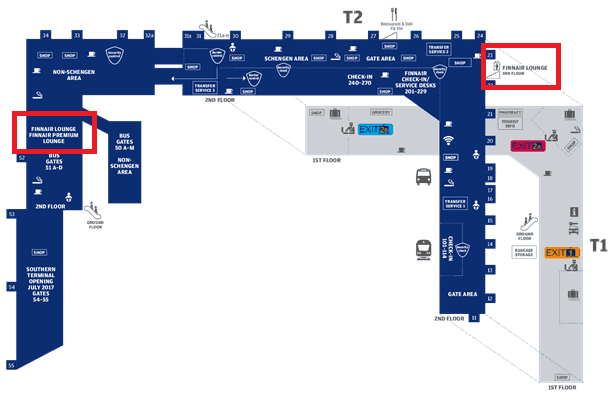 As I alluded to earlier, the reason I found myself at the Finnair Lounge Helsinki Airport was as the result of a British Airways tier point run.  For those who are new to the concept of a tier point run, it’s essentially a collection of (sometimes pointless) flights taken to retain status with a certain airline.

Flying with British Airways in Club Europe provides complimentary lounge access and so does my Gold Status with the British Airways Executive Club.  As is the case with many airports where British Airways doesn’t have a lounge, BA team up with their local oneworld partner, and as a result the Finnair Lounge also doubles as the BA Lounge Helsinki.

So who else can access the Finnair Helsinki lounge?

The Schengen lounge is situated directly above gates 23A and 23B, accessed by the lovely set of stairs you can see below. 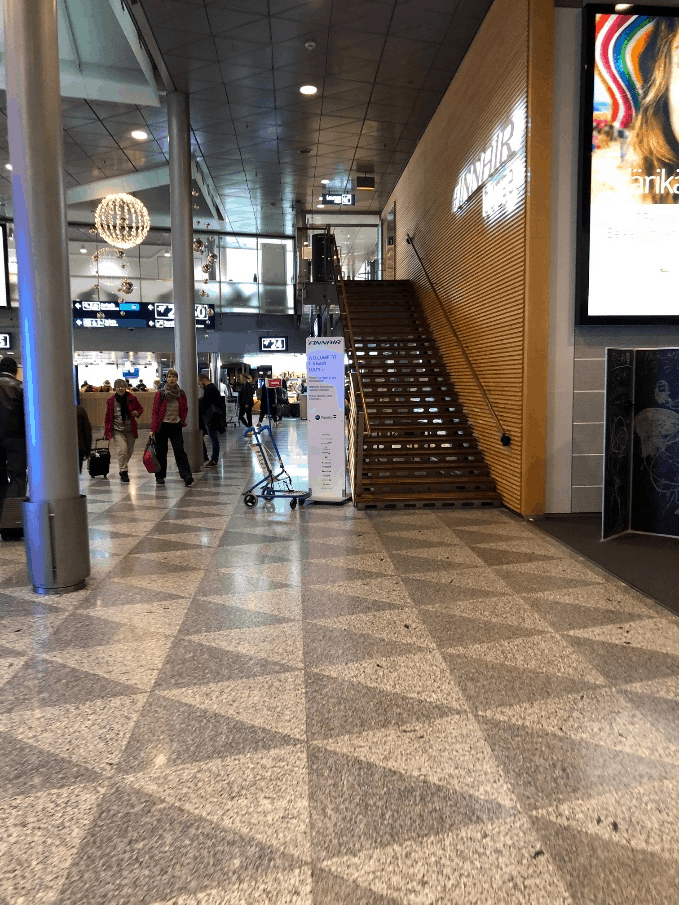 After making my way upstairs I was greeted by the receptionist who asked whether I’d visited the lounge previously.  Whilst I’d visited the other lounge the day before, this was my first time to this particular Finnair Helsinki lounge, so she kindly ran through the various elements of the lounge.

Having been in the other Finnair-operated lounge within the last 24 hours, I was impressed with the overall size and the fact that various areas at the time of visiting (6am) were almost completely empty.

With a total capacity of 320 passengers, it’s the largest lounge at the airport and is arranged in a long, thin layout.  Upon entry you find yourself in a small seating area leading to the main dining facilities predominantly arranged with high stools and benches. 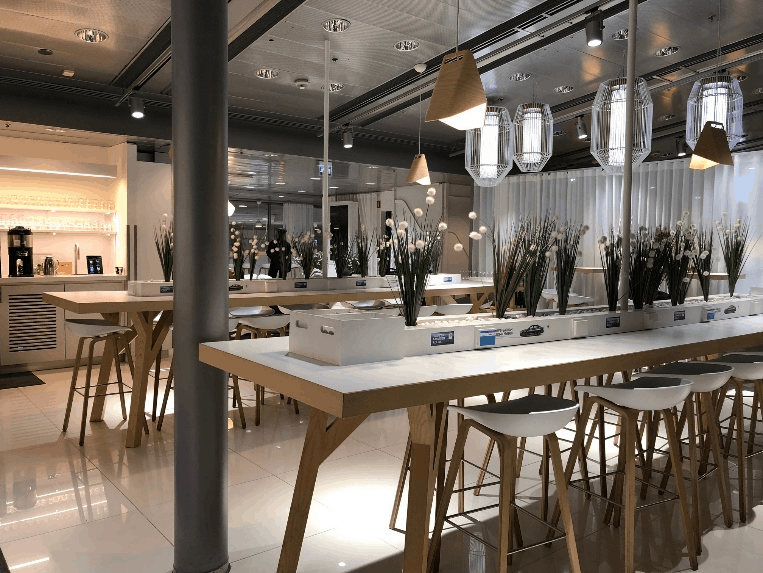 The further into the lounge you venture, the more relaxed in nature the seating becomes until you reach the observatory area at the far end – I suspect in daylight it has great views over the runway but it is slightly difficult to tell in the pitch black.  Comfy seating, nonetheless! 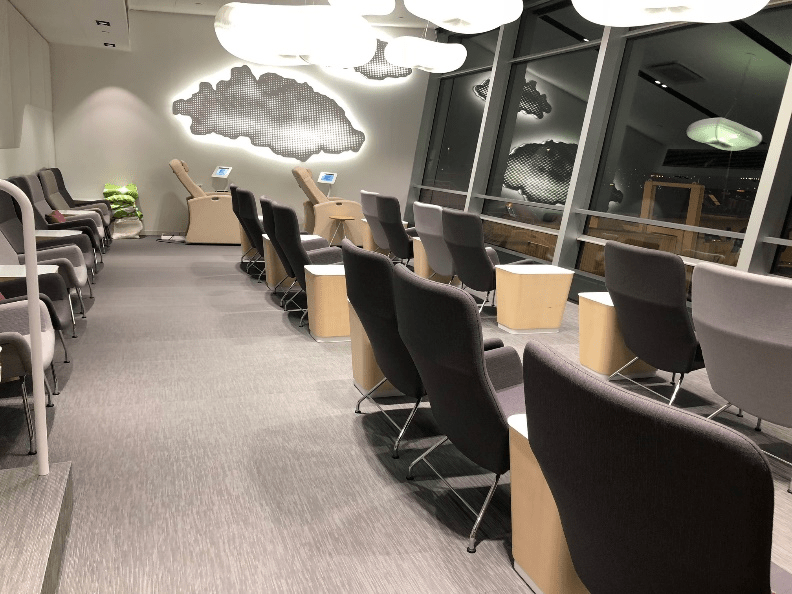 Couldn’t help taking the below massage chair for a spin… Not quite the same as treating yourself to a full spa treatment at the Elemis Spa Heathrow but still relatively relaxing (especially after taking 5 flights over the previous 2 days!). 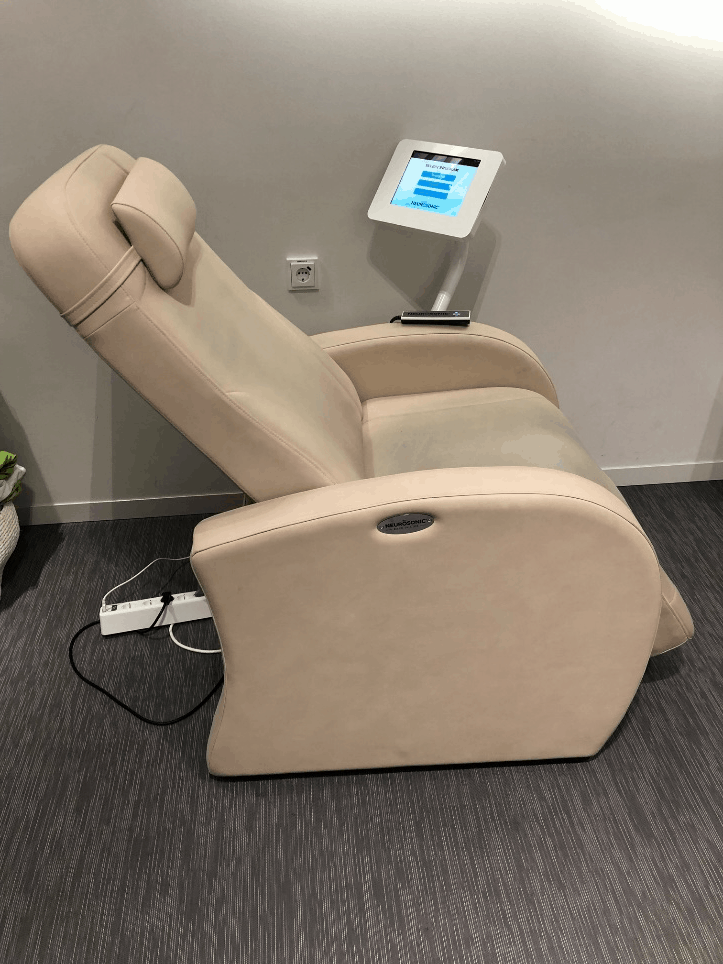 Food and Drink at the Helsinki Finnair Lounge

A hot breakfast in the Helsinki Airport Finnair lounge is served between 05.30 and 10.30, although having lived off airport lounge food for the last couple of days I wasn’t feeling particularly hungry. 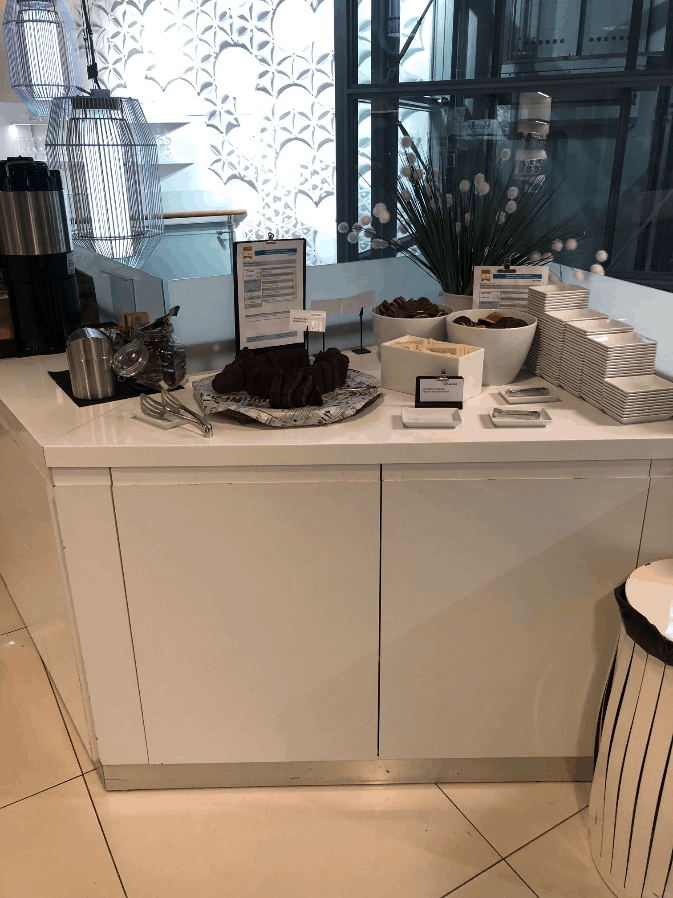 There was a good selection of alcoholic and non-alcoholic drinks.  Various coffee stations were situated around the bar with iPad-controlled juice dispenser. 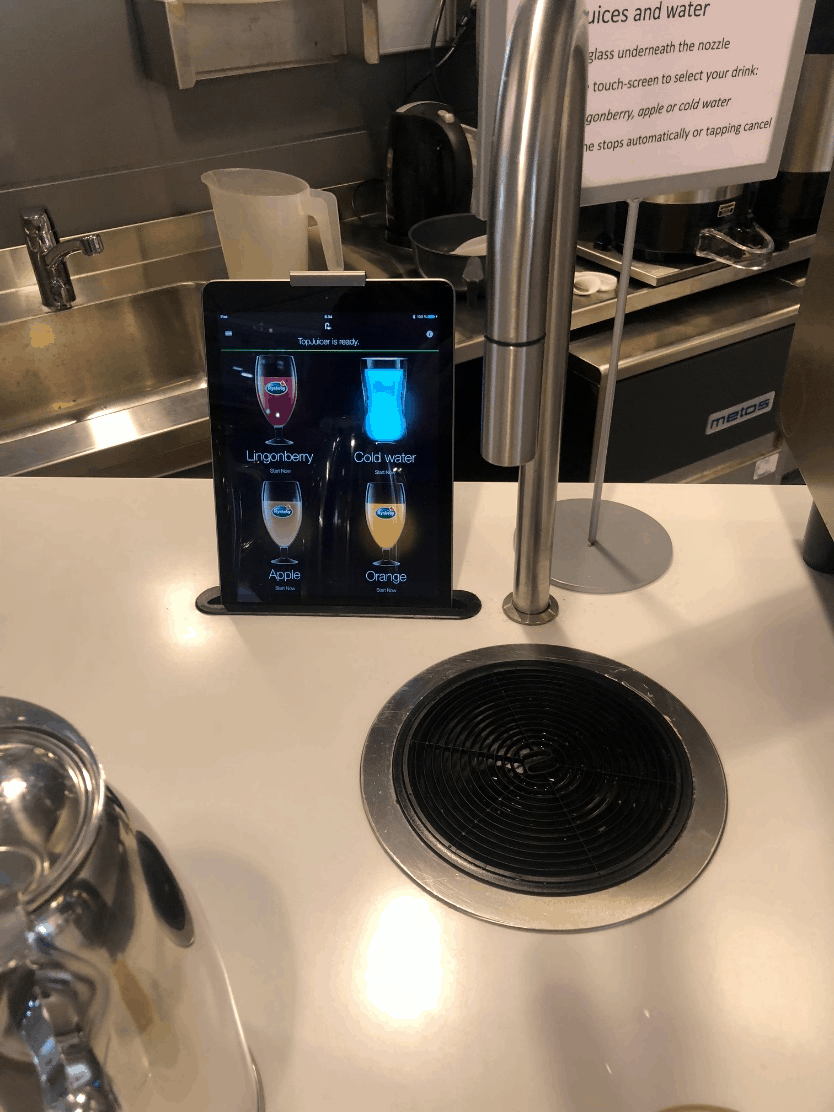 For alcoholic drinks you had the choice of being able to use either the main bar or alternatively the self-service area predominantly offering a selection of wines and beers. 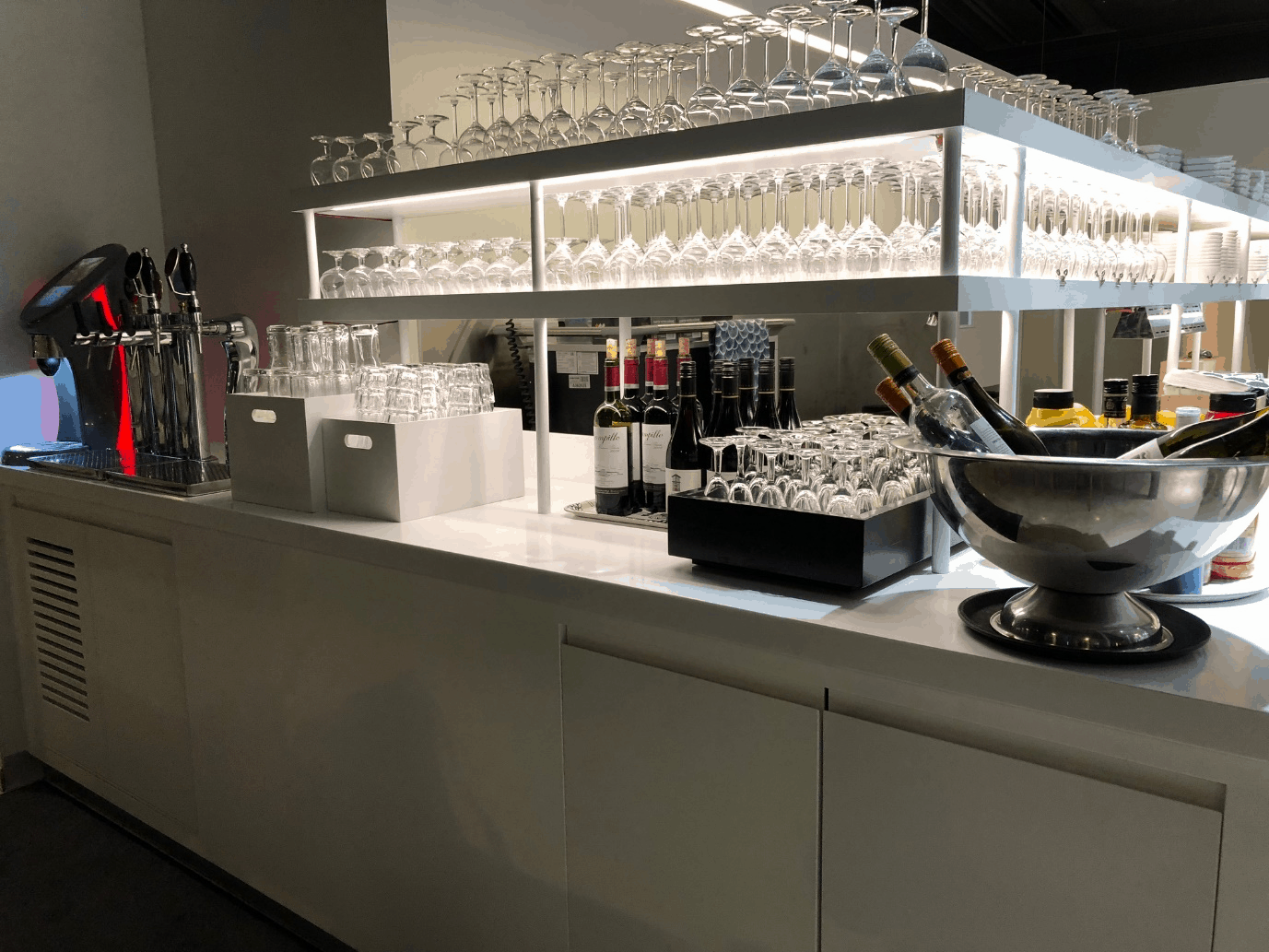 The wine most certainly isn’t premium but is in line with what you’d receive at most of the oneworld alternatives.

Ok, so what else does the lounge offer?  A kids’ area.  Can’t say I used this I’m afraid.  Separate working area with private phone booths (both equipped with iMacs) – I can’t emphasise enough how much of a good idea I think these are.  The number of times I’ve found myself having to make that last minute conference call just before a holiday and found that an overcrowded lounge at the start of Easter is louder than the school playground…  Plus no one wants to have to listen to one of my boring calls so it’s a win-win!

Unlike the British Airways lounges which tend to only offer showering facilities in either their First Class or arrival lounges, the Business Class Finnair Lounge Helsinki offers two private shower suites.

Final Thoughts on my experience in the BA Lounge Helsinki

Having the benefit of being able to visit both Helsinki Airport Finnair lounges, if I had plenty of time I would always head to the lounge located in the Schengen departures hall.  However just remember to leave enough time to get through passport control if you’re heading to a non-Schengen destination.

The deeper into the Finnair Lounge Helsinki Airport you venture the quieter and more relaxed it gets, although you may struggle to get any sleep with the extremely ‘effective’ lighting….