SkyTeam was the last of the three major airline alliances to be formed in 2000.  SkyTeam comprises of 19 airlines including the likes of Delta, Air France, Alitalia and KLM to name a few.  Today we’ll be looking at an alternative SkyTeam credit card to earn air miles which can be redeemed across the following 19 airlines.

At present none of the airline alliances offer a branded credit card and as such there’s no such thing as a SkyTeam credit card.  Whilst the majority of the individual airlines have their own credit cards, I believe each alliance is missing a trick by not launching an alliance-branded credit card of sorts.

Not only would this help to increase brand awareness but also promote cross-airline redemptions.  However I suspect there are various logistical factors which need to be considered.  This leaves loyal SkyTeam customers looking for ways to earn air miles on their everyday credit card spending.  This article looks at the best credit cards which allow you to redeem air miles across SkyTeam airlines.

The options for an alternative SkyTeam Credit Card UK

Regular readers may have read my recent articles on both the KLM Credit Card and Air France Credit Card.  Within each of these articles I touched upon the Flying Blue Credit Card issued by American Express which is only available to Dutch, French and Swiss residents.

As we highlighted within these articles the most efficient method for UK residents to earn air miles through credit cards would be to utilise the American Express Membership Rewards programme.  Amex allows you to transfer points to a total of 12 airlines of which SkyTeam members Delta, Air France, KLM and Alitalia are all partners.

If we were to use Delta as an example, we could transfer 1 membership point to 1 air mile and then search for reward availability with ‘partner airlines’.  This will include the remaining 18 airlines within the SkyTeam alliance.  We’ve provided an example below for a flight between Singapore and Jeddah using 40,000 Delta miles for an economy ticket on Saudia Airlines. 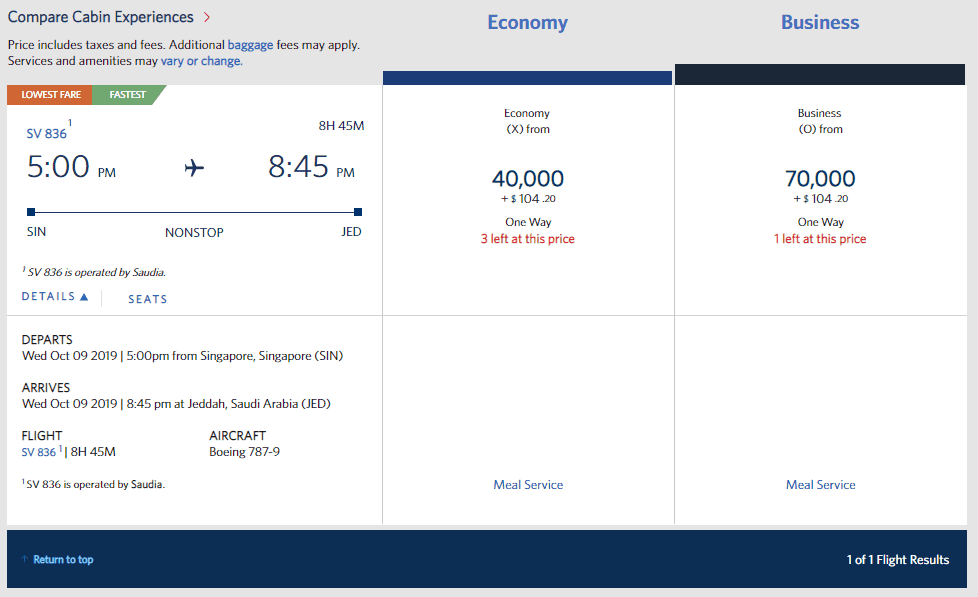 With this in mind, what are the best American Express Membership Rewards credit cards which could double as a SkyTeam Credit Card UK?

Your best option is likely to be the American Express Gold card (reviewed here).  The card is free for the first year and offers a generous sign-up bonus of 10,000 points when you spend £3,000 in the first 3 months.  You’ll also earn a further point for every £1 spent on the card as well as receiving two free airport lounge passes.  The sign-up bonus is increased to 12,000 points if you’re referred using this link.

Another option for an alternative SkyTeam credit card would be the Starwood Preferred Guest American Express credit card (reviewed here).  The SPG card earns points that are automatically sent to the Marriott Bonvoy scheme, which has an impressive list of 44 airline redemption partners.  Of these the following 9 redemption partners are part of SkyTeam – Aeroflot, AeroMexico, Air France, Alitalia, China Eastern, Delta, KLM, Korean Air and Saudia Airlines.  The SPG card comes with an annual fee of £75 which is likely to be partially offset by the 30,000 points sign-up bonus when you spend £2,000 in the first 3 months.  Again this can be boosted to 33,000 points using this link.

If you’re looking for a MasterCard or Visa Card your options for a SkyTeam credit card are limited.  With the recent tie up between Delta and Virgin Atlantic you can now redeem Virgin Flying Club points on Delta flights.  This opens up the opportunity to use the Virgin Atlantic credit card (reviewed here) to earn miles which can be redeemed on Delta.  Unfortunately it’s only Delta that these can be used on and as such doesn’t provide access to any of the other 18 airlines within the SkyTeam alliance.

With the 12 airline transfer partners offered by American Express, the ability to transfer points to either KLM, Air France, Alitalia or Delta offers the opportunity to earn air miles on a UK credit card which can be redeemed across the SkyTeam alliance.

The redemption rates for certain flights across Flying Blue (the joint frequent-flyer programme for KLM and Air France), Alitalia and Delta is likely to vary.  As such we’d recommend that you keep the points as American Express Membership Rewards points until you’d like to book a redemption flight and then check all three schemes for the lowest number of points and cheapest taxes.

The best card for this strategy would be the American Express Gold Card.   Whilst the sign up bonus has recently been halved, you can still benefit from an enhanced sign up bonus of 12,000 if you’re referred.  We’d be delighted if you used our link – found here.  As always we’d love to hear your thoughts in the comments section below.